This post is re-posted with permission from The Airstream Chronicles Continued.

Well, let’s just pop up a graphic here and you can see….. 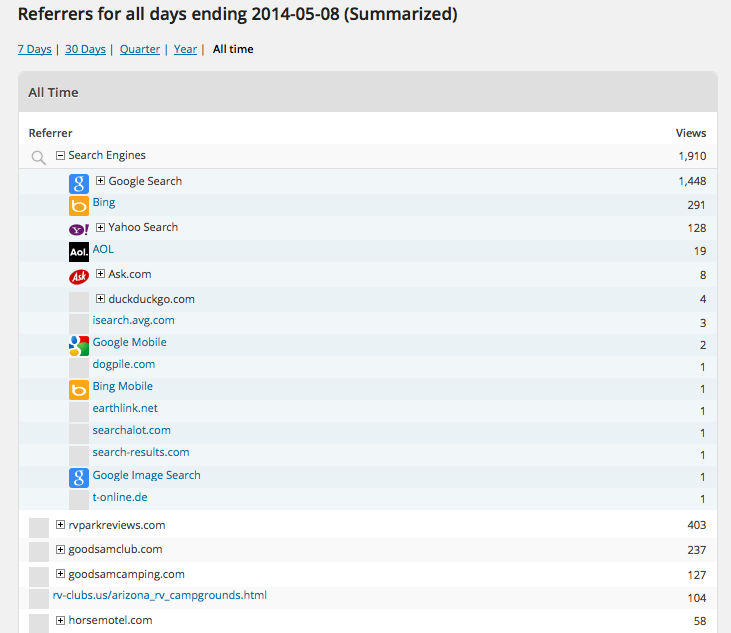 These numbers are from a recent client.  Actually, they’re from a site we completed at the end of February.  So basically you’re looking at the numbers for March & April.  What we’re seeing here says a lot to me.

Standard search engines carry the day.  Google, Bing, and Yahoo drive a lot of visitors to the website.  Behind the standard search engines?  RVParkreviews.com.  Not surprising, that site is becoming one of the “go to’s” for RV’ers.  The park is also a Good Sam park, so the next two sets of refers comes from users going directly to the Good Sam site and looking up the park from there.

What’s interesting to me is the fact that the bulk of the client’s refers come from free links.  Google and the rest of the search engines are providing a ton of traffic.  RV Park Reviews, also a free service, sends along a fair amount of traffic.  I just find it interesting and telling.

One thing is for certain.  RV’ers are definitely using the Internet when they’re planning their trips, or while traveling.

As I didn’t post the whole graphic (it’s really long with lots or smaller referrals) we’re looking at over 3,600 referrals in two months.  So that’s an average of 1,800 potential customers per month.  For the average RV park, let’s say $30 per night, that’s $54,000 in potential bookings per month.

I wonder if these mobile websites really have value for a park……?